Valentine’s day started uber early this year with a 6:15 wake up call from our tiny tot. Where he gets this “morning person” nonsense is beyond me, I tell you it wasn’t from me. I will admit I was super excited to give Asher his Valentine and treats. He has been OBSESSING over the “oooshin” [ocean] and “whaalles” [whales] for weeks now and so we got him a Schleich blue whale and dolphin and I couldn’t wait for his reaction. So sleepily and while the son was still set, we showed Asher his new goodies. He doesn’t understand Valentine’s Day at all but he was really excited and even insisted his “whaaallle” ate breakfast with him. He even carried him around saying “hug whale” and “kiss whale” and proceeded to show this new friend his affection. It was quite adorable.

The hubs was amazing and let me go back to sleep for a bit and then it was off to a local eatery for some breakfast. Asher has never had breakfast at a restaurant before so he was quite excited. He was convinced the basket of creamers were special-for-him play things and when the waitress brought our drinks on a full tray of food (for another table) he let out a yelp of excitement at how quickly his ‘pantcakes’ and eggs had arrived. He went on to thoroughly enjoy his (and mine) breakfast. 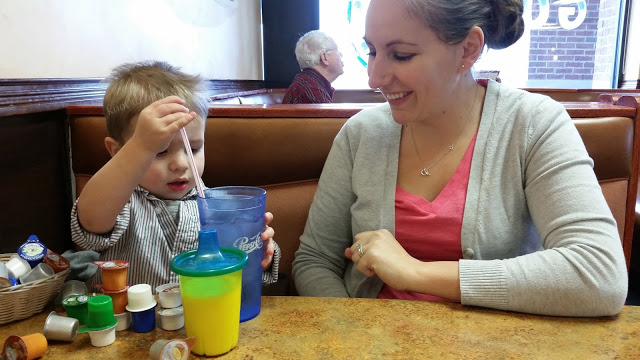 After eating more than we should have, we headed back home and spent the next few hours playing and before long Asher climbed up in my lap to read a few books and before I knew it he had fallen asleep so he and I retired to bed to take a much anticipated mid-day nap. And of course being a pregnant hormonal mom I slept for a bit then woke up and stared at my beautiful child and sadly remembered how quickly he is growing and how one day I am really going to miss our cozy naps together. [sad face] 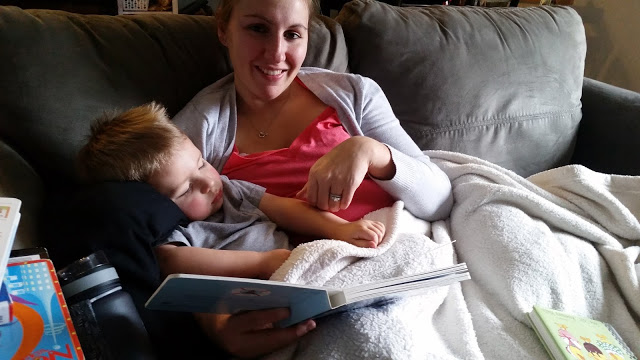 After nap time had a late lunch at home and then as evening approached the in-laws came over to watch our little man while the hubs and I went out for a much overdue date night. Now apparently while we were enjoying family time old man winter decided to be a  huge jerk and dump way too much (any at all at this point) snow and so it was freezing and the drive took longer than expected but we ended up having a great night. We participated in the Escape Room-which I highly recommend if you have one in your area. Then we finished the night off with more Italian than we probably should have eaten but it was delicious and we regret nothing.

Valentine’s Day 2016 was amazing (minus the snow part…really any day spring!). How did you and your loves spend the holiday??

Hi there! Welcome to The Well Planned Mama. I’m Justina. I am the wife of a swell fella and a mama to three, amazing, rambunctious kiddos. I have a passion for motherhood and I am working daily towards living a more simplified, intentional life. Follow along as I share my passion for home and life organization and work to help other moms simplify their home and life along the way.

Knot to Nest is a participant in the Amazon Services LLC Associates Program, an affiliate advertising program designed to provide a means for sites to earn advertising fees by advertising and linking to amazon.com