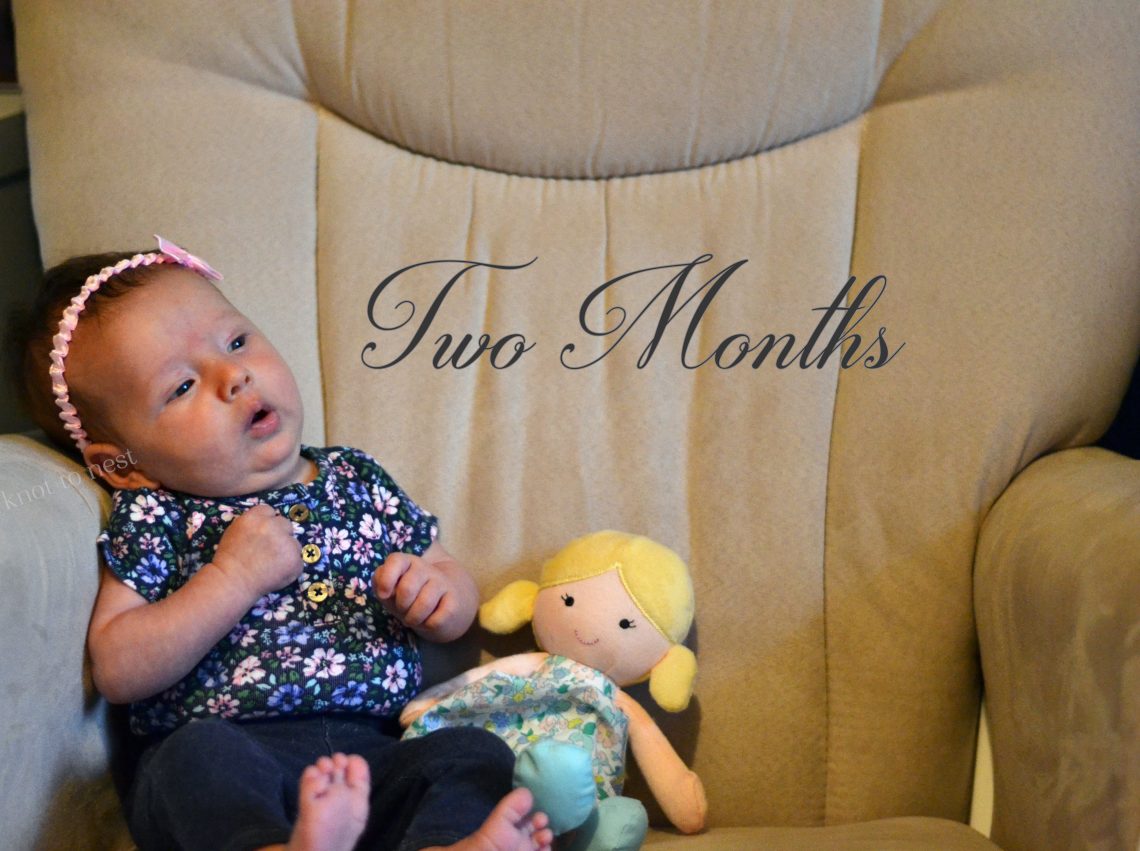 2 months!? No way! This month has been much easier than the first simply because I regained more of my footing/ability to get around without much pain this month.

This month I started venturing out with both kiddos pretty regularly each week. I really wanted to make sure things were kept fun for Asher while I was on leave so each week we go to storytime at the library, play at the park, go on small errands, or walks around the neighborhood.

It was a bit of a learning curve trying to get a process down with two little ones but we trudged through and now I feel like an old pro (most of the time).

Finally into size one diapers and a few cloth diapers here and there. The plan is to get her into full-time cloth soon but honestly keeping up on two kids worth of cloth diapers is a bit daunting sometimes.

She is wearing a bit of both newborn and three-month clothes at this point. She has outgrown all her newborn pjs in length but all her other outfits are still fitting pretty well.

Still nursing like a champ though we continue to have issues with her latching on the right side. She seems to have some tightness in her neck that makes it difficult for her to latch so we are hoping to get that looked at. She also continues to have some reflux type symptoms. Mostly spitting up, gagging, and gassy episodes.

She is still sleeping like a champ most nights. She and I have continued to sleep on the couch because she is so tiny it makes me more comfortable to have her on my chest.

Until about 7 weeks old she was sleeping contently on my chest but recently she has started to want to be on her back or side more. She protests her sleeping arrangement by kicking her tiny legs like a frog. For such a tiny one she packs some serious power in those legs.

She has woken me from a dead sleep by kicking my incision site. Not a c-section side effect anyone told me about! She has continued to sleep pretty well with waking only to eat and sometimes I have to wake her to eat. She only naps when held by me or in the ring sling.

Since it has been a minute since I had a tiny one, I had forgotten about the need for multiple naps in a day. I felt pretty bad when I realized the poor girl was awake likely more than she wanted due to big brother and the chaos that is a toddler boy. Luckily (for all of us) both kids have been taking a pretty long mid-day nap so I, too, get a nap each day.

Hi there! Welcome to The Well Planned Mama. I’m Justina. I am the wife of a swell fella and a mama to three, amazing, rambunctious kiddos. I have a passion for motherhood and I am working daily towards living a more simplified, intentional life. Follow along as I share my passion for home and life organization and work to help other moms simplify their home and life along the way.

Knot to Nest is a participant in the Amazon Services LLC Associates Program, an affiliate advertising program designed to provide a means for sites to earn advertising fees by advertising and linking to amazon.com